KJ Fire Awarded ‘Commitment to the Cause’ at Derian House Awards 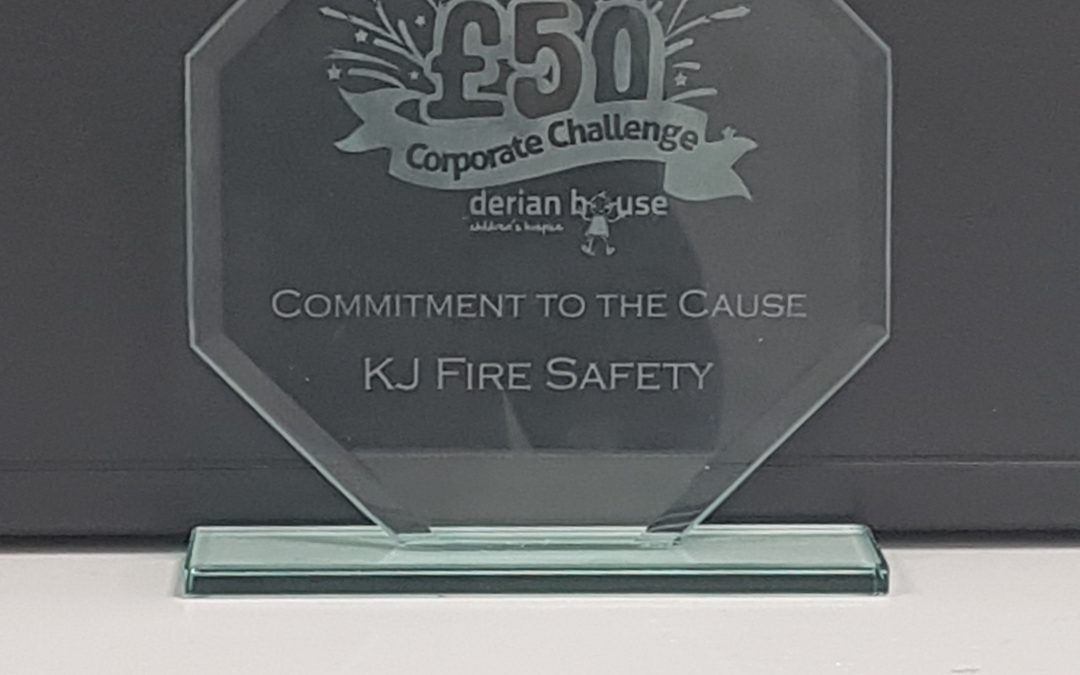 Last Friday, KJ Fire had the privilege of attending a Corporate Awards Evening held by the team at Derian House, in conjunction with Sales Geek. The event was to celebrate the fantastic fundraising achievement of the 23 local businesses that took park in the charities first ever £50 corporate challenge.

Earlier in 2019 at the beginning of the corporate challenge, each business involved was given £50 and with this, asked to host a number of events and activities in order to raise donations for Derian House. The companies involved could raise money through any activities they wished, such as sponsored walks, golf days, bake sales and even body waxing!

KJ Fire organised 4 massive challenges in order to raise as much money as possible! The very first challenge took place in March 2019 , a 10k coastal walk in Sydney, Australia. Heather Thomas took some time out of her break away from the office to partake in this stunning, world-famous coastal walk starting at The Spit and ending at the iconic Manly Beach.

The second challenge was a hike up the three peaks. This saw several team members coming together to take on 3 of the big boys: Helvellyn, Skiddaw and Scafell Pike over the course of two days. The team battled through the elements to reach the top of the mountains, even with the challenge almost being called off as a result of the bad weather.

In July, the team took part in a 60 mile Manchester to Blackpool ride, which began at Media City in Salford and ended on the Promenade in Blackpool. The team thoroughly enjoyed riding through the great British countryside basking in the fabulous weather.

In August KJ Fire joined 200 other Derian Supporters and took part in their annual Walk the Bay event. Setting off from the promenade at Arnside and heading onto the sands, led by the Queen’s official Guide to the Sands, Michael Wilson. The team crossed the River Kent and finished at Kents Bank Station. A total of £9000 was raised on the day! Lots of fun was had by all in the glorious sunshine.

KJ Fire Safety came FIFTH on the leaderboard overall for the amount of money raised! This is a massive achievement being the first time the company has taken part. We even won an award ‘Commitment to the Cause’. Company MD Nigel Thomas was presented with a framed certificate and a very swanky glass award! The awards night was a brilliant opportunity for KJ Fire to get to know other local businesses and do some networking!

Collectively, the twenty three businesses involved in the project raised over £30,000! The money raised will make such a massive difference to families who are supported by Derian House. It is enough to send 35 families on a holiday for a week to assisted living facilities and to give them a well-earned rest.

Our fundraising for Derian House continues and the next challenge is definitely our biggest yet! Due to take place this November, Heather (our Operations Manager) alongside her partner Curtis will visit Peru to take part in a 5 day trek high up in the Andes Mountains. They will be joined by a guide and climb the remote Salcantay trail to the ancient ruins of Machu Picchu. We are sure to have plenty of pictures and updates which we will post to our blogs and social media accounts.

If you would like to support Derian House and Heather and Curtis on their adventure, please click on the link to donate.

We cannot wait to sign up for the next £50 corporate challenge, hold some fantastic fundraising events and see if we can beat our previous record!!