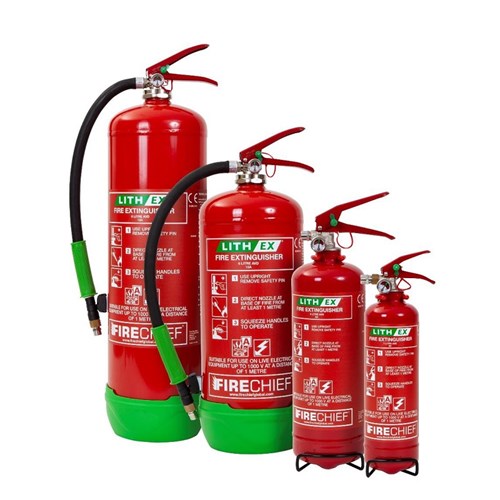 Lithium batteries present a more frequent fire hazard each day as the number of consumer and industrial goods powered by them increases. Firechief have launched the ground breaking and highly effective Lith-Ex Fire Extinguisher range.

The high performance Lith-Ex extinguishers contain AVD (Aqueous Vermiculite Dispersion) compound – a revolutionary fire extinguishing agent designed to target high risk fires of a limited size. They are suited to confined spaces such as homes, hotel rooms, vehicles, public transport, aviation, marine or leisure and dedicated processes where in all instances fires need to be suppressed in their infancy before developing into a fully established fire.

Lith-Ex extinguishers are ideally suited for Lithium-based battery fires such as those which may occur with personal electronic devices, for example, mobile phones and tablets. They can also be used to protect against fires where batteries are under charge, and where batteries are stored; for example, goods distribution, battery collection bins, battery recycling locations, public services, battery charging stations and many other scenarios.

The Lith-Ex Extinguisher is compact, lightweight, easy to store, non-toxic and environmentally friendly. It will extinguish uncontrollable flames, quickly cool the excessive heat and prevent re-ignition, something that an ABC powder extinguisher or other liquid-based extinguishers will not be able to do on a Lithium-ion battery fire.

When a lithium-ion cell goes into thermal runaway (increase in temperature) there are multiple possible sources of heat; for example:

In addition to this multitude of mechanisms, the design of the cell often prevents direct access of the extinguishing agent to the source of the fire. Thus, it is difficult to extinguish the fire, permanently cool all of the components to below their auto-ignition temperature and prevent re-ignition by delayed reaction processes.

Water is a good agent for extinguishing and cooling Class A fires; however, water has a problem in that it flows away from the target and hence requires continuous discharge until the fire is extinguished and cooled. For class A fires this is not usually an issue but for a battery in thermal runaway, heat generating processes continue until all the stored energy is dissipated; this means that the temperature can rise again leading to re-ignition. What is needed is an agent that can overcome these limitations.

AVD is a stable dispersion of refractory vermiculite platelets in water. When applied to the initial fire, AVD quickly extinguishes it; the water cools the system, the high surface area mineral platelets interrupt the radical chain reaction and a refractory film forms which impedes oxygen diffusion to the fuel source.

Another advantage of AVD is that as it dries it forms a thermally insulating film which reduces the risk of thermal runaway propagation to adjacent cells. The non-combustible vermiculite film also coats the packaging of adjacent cells preventing the spread of fire. The film also isolates combustible components from the air, preventing ignition.

Committed to quality & the environment:

As you would expect from a UK company that is committed to quality, we adhere to relevant industry standards. Lith-Ex Extinguishers are certified according to the European standard EN3-7:2004 + A1:2007.

The extinguishing agent AVD is environmentally friendly and is made from naturally occurring vermiculite which is propelled using nitrogen.

This Fire Extinguisher offers protection against class A, Lithium and Electrical type fires.

Top tips to minimize the risk of fire or explosion:

The risk of fire or explosion increases if the Lithium-Ion battery is exposed to hot conditions or the battery or internal components are damaged, so simply dropping or crushing your mobile phone could cause it to catch fire. To reduce the risk of a battery fire incident: